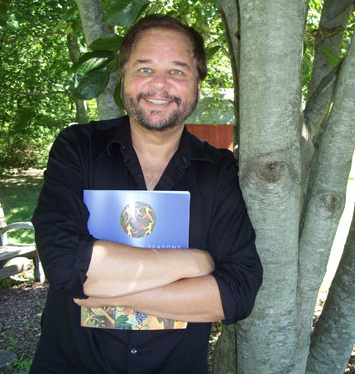 Reverend Douglas Ryniewicz was a trained therapist in individual, group, couples and family counseling prior to seminary studies at Yale and Gettysburg. Pastor Doug was ordained in 1997. He is very interested in people’s spiritual and personal growth, in developing healthy, lively congregations, in family and youth ministry, in liturgy and worship and in ecumenical and interfaith dialogue and partnership. 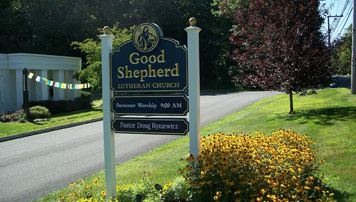 We are located at 466 Elm Street in Monroe, Connecticut. Directions are available through Google Maps, Mapquest, or by calling our office.

The seeds were planted in 1960 when Frank and Anna Gibiser contacted Lutherans in Monroe, Shelton, Easton, and Newtown about starting a more local church. The first meeting was held on a snowy evening in February, 1961 at the Gibiser home in Monroe. Pastor Benson of Salem Lutheran in Bridgeport advised the group of the many obstacles involved, including resistance from local churches to start another church in a town with a population of only 4500.

The first service was held at the East Village Methodist Church, and we were warmly welcomed by their pastor. He closed his welcoming remarks by stating that with the turn out Good Shepherd had for its first service, he could understand why the other churches in town were resisting its start, and he was glad we were in his church where he could keep an eye on us!

Good Shepherd began officially as a mission church of the Augustana Lutheran Synod, which later merged with The Lutheran Church in America Synod. Pastor Orville Lind answered the call to be our first minister and came to Monroe with his family. On November 12, 1961, Good Shepherd was officially organized with 83 charter members. 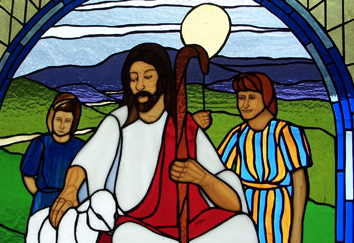 The stained glass windows in the sanctuary were created to honor the memory of Pastor Charlie Schwarz, who had served at Good Shepherd for 29 years. The project spanned over four and a half years, representing the labor of an extraordinary group of volunteers from the church. Each window contains a road - the road takes the viewer in a chronology from Genesis in the Old Testament to the Gospels in the New Testament.

Good Shepherd also has a long history of mentoring future ministers through our internship program. We have supervised eight full-time and two part-time interns.

The church office is open from 9am-12pm, Monday-Thursday.

Our mission is to be more visible, to become more connected, and to draw closer, with Christ as our center.

Good Shepherd is very supportive of community groups. If your group is interested in utilizing our community areas, please contact us for further information.